We are delighted to have been appointed to manage a listed apartment block in Bradford which is frequently used as a film set for a variety of popular TV programmes.

Law Russell House, on Vicar Lane in the Little Germany area of the city, was built in 1873 as a textile warehouse as Bradford’s woollen industry boomed.

The seven-storey, grade II listed building later became offices and then lay empty for several years before being converted by Trajan Estates into 71 apartments following a £4.5m investment. 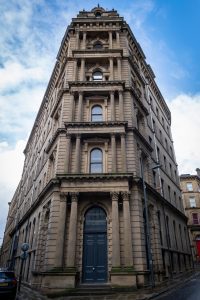 Completed in 2019, the redevelopment has seen the creation of one and two-bedroom flats and studio apartments, with office space and meeting rooms on the ground floor. The apartments are popular with working professionals and students, and are fully-tenanted.

The site adds to our expanding portfolio of management contracts across Yorkshire, with several new agreements coming on-stream in the next few months.

Michael Willans, senior property manager at Scanlans’ Leeds office, commented: “It’s a brilliant new instruction in a sought-after area and is a superb addition to our growing portfolio of management contracts. 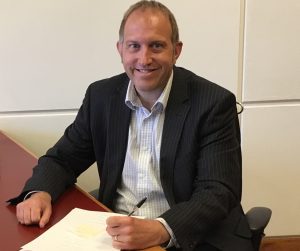 “Law Russell House is an iconic building with bags of history. It’s great to see Little Germany buzzing as regeneration projects such as this take shape.

“We’re very proud to be managing the development and partnering with Trajan, and look forward to growing our relationship with the company over the coming months and years.”

Law Russell House and other areas of Little Germany are regularly seen on TV in programmes such as Peaky Blinders, Gentleman Jack, Emmerdale and All Creatures Great and Small.

Little Germany was given its name after the area was populated by Germans who came to trade in Bradford’s thriving woollen industry in the 19th century.

Trajan, which was founded in 2005 by director Owen Carter and is based in Saltaire, Shipley, near Bradford, has completed numerous residential and commercial projects in the north of England. Trajan specialises in preserving heritage buildings and urban redevelopment, focusing on derelict buildings to convert them into living space.

Owen said: “Law Russell House was a great personal journey for our company and such a significant listed building deserves first-class management.

“As this was our first development on this scale, Scanlans was invited to tender after being recommended by other developers in the area. We’re delighted to have Scanlans working with us, bringing a wealth of expertise.

“We hope this has set the foundations for a strong working relationship for many years to come, as we will be partnering with Scanlans on our future developments too.” 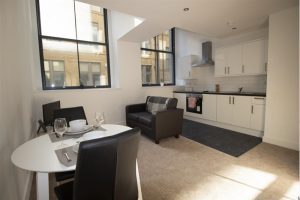 About the Author: Ian Magenis

Note: Telephone calls may be recorded.

You can view our complaints procedure here: Scanlans Complaints Procedure

©2020 SCANLANS PROPERTY MANAGEMENT LLP is a Limited liability Partnership registered in England and Wales under no. OC347366.

This website uses cookies to improve your experience while you navigate through the website. Out of these cookies, the cookies that are categorized as necessary are stored on your browser as they are essential for the working of basic functionalities of the website. We also use third-party cookies that help us analyze and understand how you use this website. These cookies will be stored in your browser only with your consent. You also have the option to opt-out of these cookies. But opting out of some of these cookies may have an effect on your browsing experience.
Necessary Always Enabled
Necessary cookies are absolutely essential for the website to function properly. This category only includes cookies that ensures basic functionalities and security features of the website. These cookies do not store any personal information.
Non-necessary
Any cookies that may not be particularly necessary for the website to function and is used specifically to collect user personal data via analytics, ads, other embedded contents are termed as non-necessary cookies. It is mandatory to procure user consent prior to running these cookies on your website.
SAVE & ACCEPT
Go to Top